Daily Mail and Iceland told off over botched Marmite campaign

A recent Daily Mail in paper voucher promotion for a free jar of Marmite redeemable at Iceland stores received a lot of consumer complaints and an ASA Ruling. So, where did it all go wrong?

Last week the Daily Mail was found to be in breach of no less than 8 CAP Code rules. See Ruling for full details but in summary, the promoter failed to correctly estimate the likely demand or provide sufficient stock of Marmite to deal with consumer redemptions. As the ASA said; “Some complainants had found or understood that some stores had fewer than ten in stock or none at all…Iceland was not capable of meeting the likely demand for the product.”

Iceland showed evidence that they had over 10,000 jars of Marmite in stock across their stores, and that under 6,500 coupons were redeemed. The problem was that redemption was not evenly distributed across all stores –  some stores received a higher number of vouchers than others and customers were left empty handed resulting in numerous complaints. 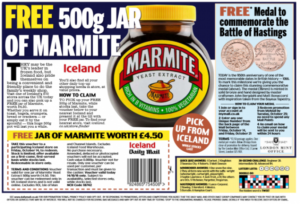 The Daily Mail had stated on their front page in capitals that the Marmite was “Subject to availability, while stocks last, today only” and repeated this inside the paper too. However, the ASA Ruling – and the law – makes it clear that a Promoter can only rely on this ‘get out clause’ if they can show that they had made a reasonable and documented estimate of likely demand and that the actual demand was significantly unusual and unpredictable. The Daily Mail admitted that “…unfortunately, due to the promotion being agreed and issued in a very tight timescale, the parties’ lawyers were not involved in checking the wording regarding the number of Marmite jars”.

At PromoVeritas we handle hundreds of promotions every month and we have the knowledge and passion gained from years of experience. So, what would we have done differently to ensure that the promotion would have been handled fairly and compliantly?

The key to a successful voucher promotion is planning, planning and more planning. Something our Operations Team are experts at. They have worked on countless redemption promotions and can help you to plan yours carefully to avoid any disasters. Done properly vouchers can be a great way target consumers effectively and drive purchases in stores. Contact us at info@promoveritas.com or call +44 203 325 6000.

Any cookies that may not be particularly necessary for the website to function and is used specifically to collect user personal data via analytics, ads, other embedded contents are termed as non-necessary cookies. It is mandatory to procure user consent prior to running these cookies on your website.